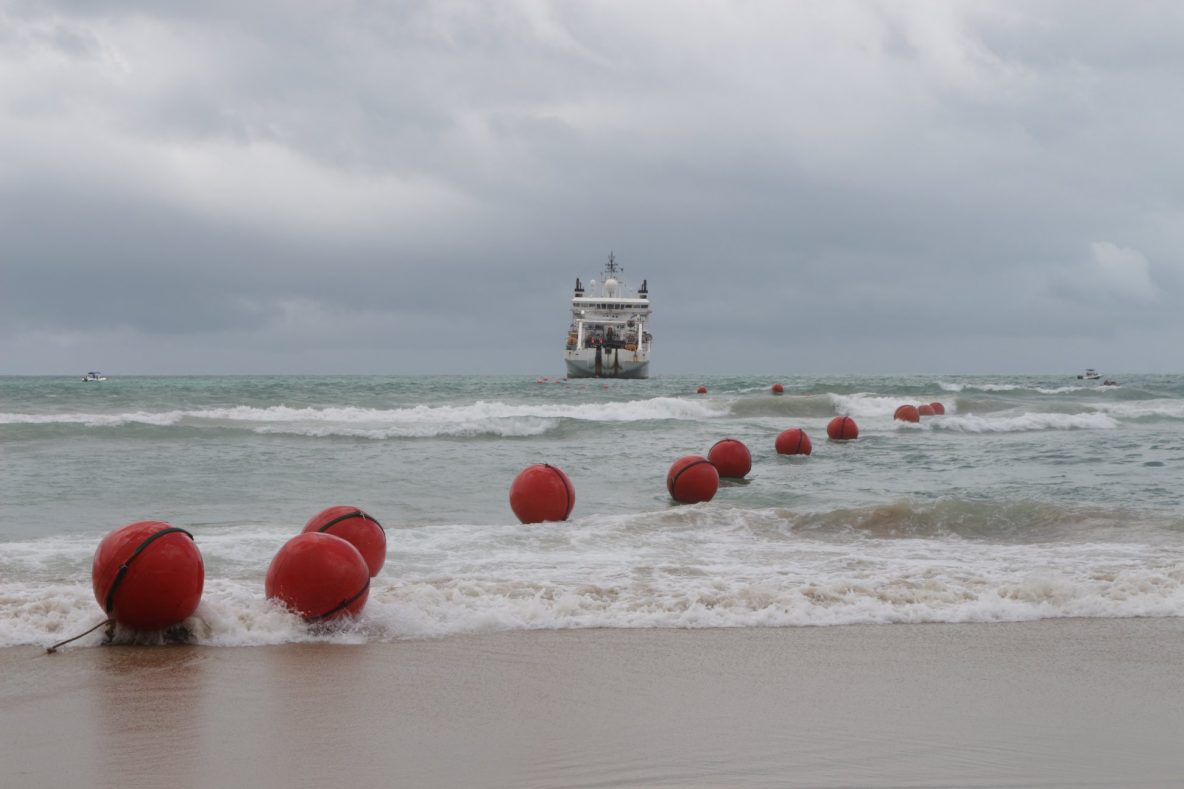 […] and during this time, Okonkwo’s fame had grown like a bush-fire in the harmattan.Chinua Achebe, Things Fall Apart 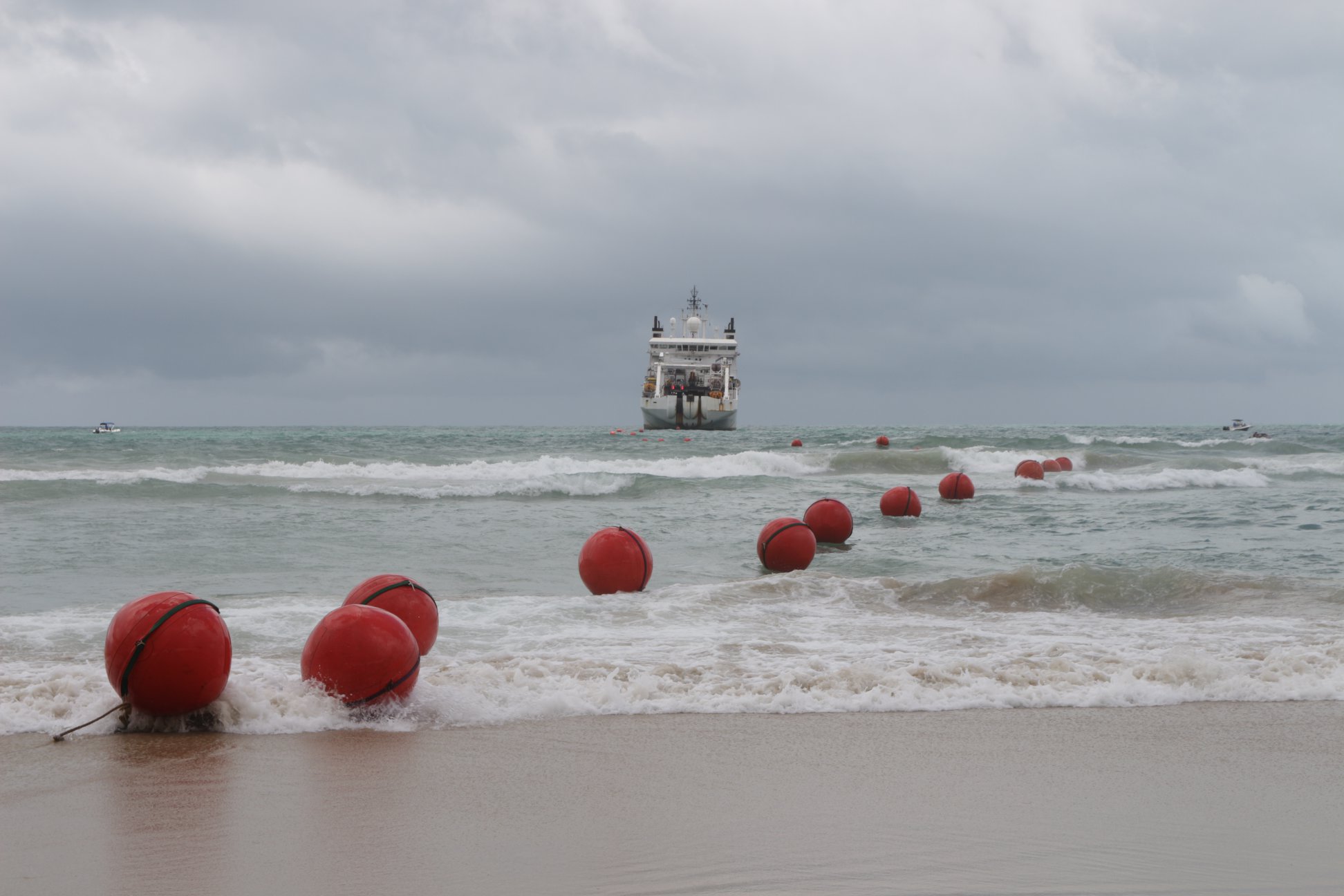 Few have been as prominent as Angola Cables, Angola’s international wholesale carrier.

The company was formed in 2009, with shareholding from Angola’s top telecommunications companies, to manage international capacity for the Angolan market, notably the country’s participation in the WACS submarine cable, as well as IRU purchases on other regional and global cables. Angola Cables also built and runs Angonap, Angola’s Internet exchange point.

What will Angola Cables do?

Today, however, Angola Cables is no longer a simple special purpose vehicle for Angolan international capacity assets. The company’s stated goal is to become a global Tier 1 network services player.  Two critical investments underpin this ambition. The first is the SACS submarine cable, connecting Luanda in Angola to Fortaleza in Brazil. A ~$160m project, the new cable is expected to be operational in the third quarter of 2018. It is slated to bring in around 40 Tbps of design international capacity on Africa’s West Coast.

The second investment is the MONET cable, which will provide a connection between Fortaleza and Miami in the United States. The MONET cable (which also includes Google as a partner) became operational in early 2018. Together, the two cables will provide Angola Cables with ownership control over what in time, can become Africa’s preferred alternative traffic route to the North American market.

The SACS cable will contribute to a sharp increase in international capacity in an African market that is technically oversupplied. Indeed, African international cable design capacity is set to blow past the 100Tbps mark this year, and essentially triple over the next three years (from 2017 levels). Equipped/Lit capacity isn’t rising as fast, but should at least double over the same period. 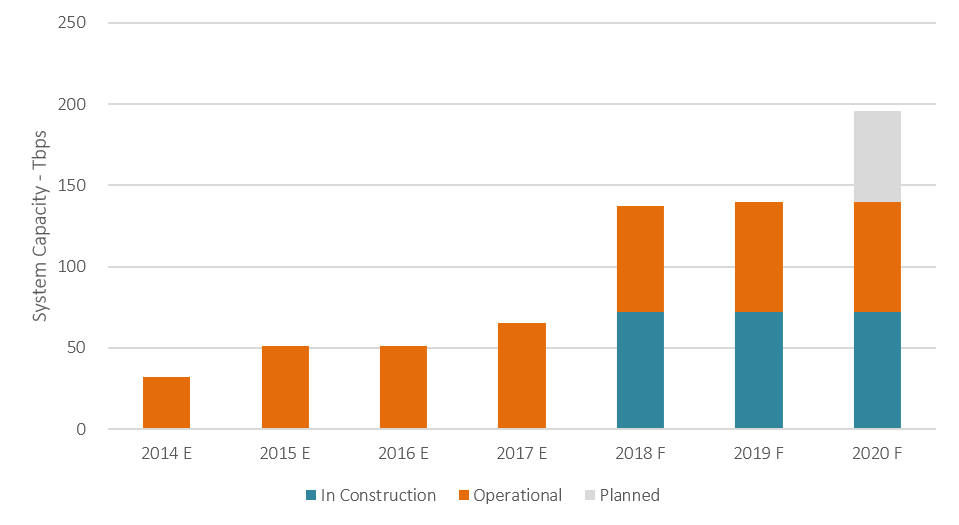 Vaulting to the Top

It’s not clear exactly how much capacity Angola Cables will light up when SACS comes online; the possibilities range from a mere two, to as many as ten fibre pairs. In effect, Angola Cable would account for between 10% and 20% of African incremental equipped capacity over the 2017-2020 period, depending on new cable launches and the scale of upgrades on other systems. At a minimum, Angola Cables is set to become a top-3 owner of Africa-focused available international capacity, behind Telkom South Africa, and on par with such players as Orange, Liquid Telecom or Seacom (1).

The Angolan market, already oversupplied with the WACS and SAT-3 cables, doesn’t have a capacity problem. The question, therefore, is what Angola Cables will do with its considerable capacity surplus. Will it exhibit rational, margin-seeking behavior, or will it choose to disrupt existing models? Can it reasonably do both? The answer to this question, we believe, has far-reaching implications for the future of African international bandwidth markets. It’s a tough read at this stage, but there are a few factors to consider.

The Angola Cables strategy has three legs, only one of which is directly connected to Africa. First, the company aims to capture some demand from Northeast Brazil (mostly for Brazil to US and Brazil to Europe traffic). Indeed, the SACS cable was initially conceived in a partnership with Brazilian company Telebras; in addition, Angola Cables is building data center infrastructure in Fortaleza to support its landing station and offer colocation services to regional Brazilian ISPs and enterprises.

Angola Cables also aims to provide a diversity route for Asia-to-Northeast US traffic. This is one of the largest corridors in the global capacity market. Today, traffic from Asia to the US Northeast (New York, Washington, Boston), currently takes a transpacific route to the US West Coast or (less practically) takes a longer trek through Europe, with latency around 300 ms (from Singapore). Angola Cables wants to offer an alternative route that runs from Asia to South Africa to Angola, Brazil and Miami, for relatively comparable latency levels.

The third leg is capturing traffic from the southern African (SADC) region, with a lower latency route to the Americas. It is on this Africa segment that the impact of Angola Cables could be most significant, in our view. Current latency from South Africa to the US, for example, is generally between 250 and 300 ms; combined with relatively low access line throughputs, this is enough to impact user experience in a meaningful way. It’s still unclear how much of this latency the SACS cable can cut; but by our calculations, and based on a variety of parameters, SACS could represent a gain of ~100ms to 150ms in latency between South Africa and the US, not an inconsequential amount.

The case for disruption…

Why might Angola Cables want to disrupt the market? First, Asian and Brazilian traffic may be ostensible targets, but winning African traffic market share will be critical to success. The Southern and West African capacity markets are still less competitive than transatlantic and transpacific routes; outside of South Africa, there’s plenty of room for downward cuts.

Second, Angola Cables has an asymmetric, built-in competitive advantage. The company can sell international capacity in many other markets in the region - but others would have a hard time penetrating Angola Cables’ home turf, thanks to a near China-like, managed competition model. In addition, all major Angolan telcos (~95%+ of the country’s capacity demand) are Angola Cables’ shareholders. They don’t really have capacity sourcing issues, essentially dampening Angolan demand for potential capacity competitors. In effect, Angola Cables can disrupt its African peers, without itself getting disrupted.

Disrupting the market now would also potentially complicate the business case for a number of proposed rival cables, most notably the privately-owned SABR cable and the upcoming SAIL cable by Cameroon’s Camtel (though the latter is even more unpredictable than Angola Cables).

…and the case for a more pragmatic approach

The case for a less disruptive approach may be stronger. For one, economic fundamentals have changed. When Angola Cables was formed, Angola was riding the wave of oil prices and on its way to dethroning Nigeria’s as Africa’s largest producer of oil. It was a closed, and highly profitable ICT market; Unitel, Angola Cables’ second largest shareholder, was a top-3 generator of USD free cash flow in African telecoms.

Today, things have changed. The Angolan economy has been in a state of quasi-recession since 2013, due to the sharp slide in oil prices. Inflation has been high, reaching ~30% on an annual basis in 2017; the Angolan currency, the kwanza, has lost ~60% of its value against the dollar since 2015. Our recent report on the Angolan ICT market (See The Upsides and Pitfalls of Africa’s Last Digital Eldorado) estimates that it has lost between $2bn and $2.5bn in US dollar revenue value since 2014, due to the impact of FX and high inflation. Likewise, the Brazilian economy (Angola Cables’ other core target) has been in a state of near recession over the past two years. 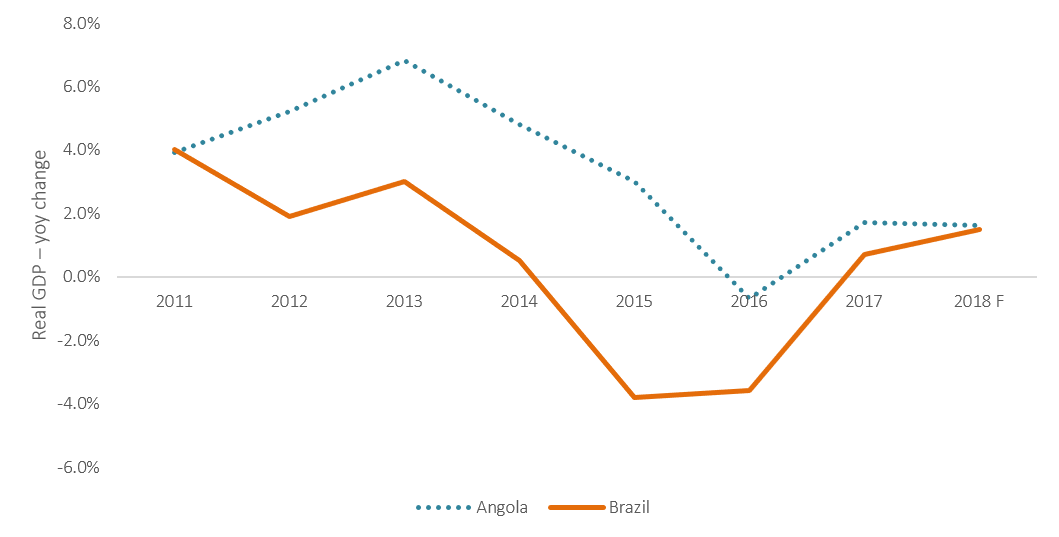 Angola also has a new president, who has appeared less profligate than his predecessor. Angola Cables’ largest majority shareholder, Angola Telecom, is a largely distressed business; it is on the privatization block. Suddenly, a venture that was started largely as an object of national pride, with relatively liberal use of capital will have to survive and grow on a primarily economic basis.

Unlike its main shareholder, however, Angola Cables appears to be well-managed; its execution to date has been excellent, even as the circumstances around it were changing dramatically. Disrupting African capacity markets through heavy price discounts would not appear optimal – and indeed, management has indicated to us that it did not intend to challenge the market in that manner.

Angola Cables can disrupt in other ways. With its configuration and capabilities, the carrier will be able to make a credible case for quality, diversity and latency. Add a ~10%-20% price cut on top of that, and Angola Cables can become a formidable challenger without needing to crash prices.

Ultimately, we expect Angola Cables to be aggressive, but pragmatic. They’ll do enough to put more pressure on international capacity prices (~15%-20% discounts) - but they will not fundamentally disrupt West African capacity pricing fundamentals. But we, like many, have been wrong before.