Part of this analysis has been culled from a Xalam Analytics report: “The Future of African Backbones and Metro Fibre Networks” – See full details here.

Who gave my NBI (National Backbone Infrastructure) to Soliton? Ugandan President Yoweri Museveni, asking about the country's fibre backbone in a Cabinet meeting*

The weight of governments in the African terrestrial fibre business is increasing. African government have committed around $1.7bn to building fibre backbone networks since 2010, according to data from our new terrestrial fibre report. In many markets, the government is the largest holder of terrestrial fibre capacity, a trend that carries significant implications as Africa seeks to enter the 4G and 5G era.

Governments have some reasonable justification for getting deeper into fibre. For a multiplicity of reasons (tough geographic economics, regulation, high rollout costs, etc.), the business case for building backbone fibre infrastructure across African countries has traditionally not been appealing to private providers. Those that built did so primarily to support their own retail operations and concentrated on capital cities.

The consequences have been numerous - an accentuation of the urban/rural divide, extensive, but closed-off fibre networks, high levels of fibre infrastructure duplication. In many markets, the lack of infrastructure and the high price points offered by private operators made it difficult for governments to extend connectivity to public service institutions – public administrations, schools, hospitals, etc. In response, most governments are taking it upon themselves to build.

Please hover around the map for sample project detail.

Are government backbones a sustainable solution?

Our research suggests that nearly all government backbones have a positive impact early on – if only by filling a supply void. They increase the fibre supply capacity; they extend fibre coverage, on open access terms, to areas private operators would not have covered on their own, except possibly to support their own retail operations. State backbones make smaller Internet services providers less dependent on fibre suppliers more focused on self-provisioning. That short term impact, in our view, is unquestionable. The question is whether it can be sustained, and whether backbones can be a source of deeper, more broad-based market growth.

On this score, the evidence is unconvincing. Several factors can help determine whether a government backbone has the hoped-for catalytic effect on broadband penetration – or whether it turns into an expensive white elephant. One is the approach used to reimburse backbone-related debt; a related issue is who manages the state backbone. Our analysis of 25 backbone projects in Sub-Saharan Africa shows that around 85% of project cost was financed through bilateral or concessional debt – of which ~65% is owed to China – at often challenging terms.

In several cases, fibre backbone management is assigned to a state-owned, incumbent carrier. This is the riskiest model, for the selection of the manager is not necessarily based on competency, but on extraneous factors – like a desire to keep afloat a bloated, but ineffective state telco. In addition, many state telcos lack the expertise or resources to manage the fibre asset well enough to provide the service level agreements (SLA) guarantees that large customers crave.

Under pressure to generate enough revenue to pay its staff and pay back the debt, the telco’s predominant inclination will be to keep wholesale prices high. At a minimum, the provider will not offer any services it suspects may undercut its revenue base – e.g. dark fibre. Given that large users of bandwidth typically prefer to acquire dark fibre links, a key source of potential demand will be curtailed. In an increasing number of cases, backbone management is assigned to an independent provider; this may work better, depending on the overall framework of the operating agreement, the revenue targets and the overall expectations.

Regulation is another indicator of potential success or failure. In a bid to protect the newly-built backbone asset, some countries sharply constrain fibre competition or forbid it outright. In many cases, retail providers are not allowed to build their own metro fibre networks, even as a complement to the existing backbone. In others (e.g. Cameroon, Botswana) utility companies are not even allowed to make their extra fibre capacity available to the marketplace, other than through the monopoly provider. Overall, the primary focus is to protect the backbone provider from competition, often under the guise of mandated infrastructure sharing.

...Who is Paying: African Government Backbones Sources of Financing 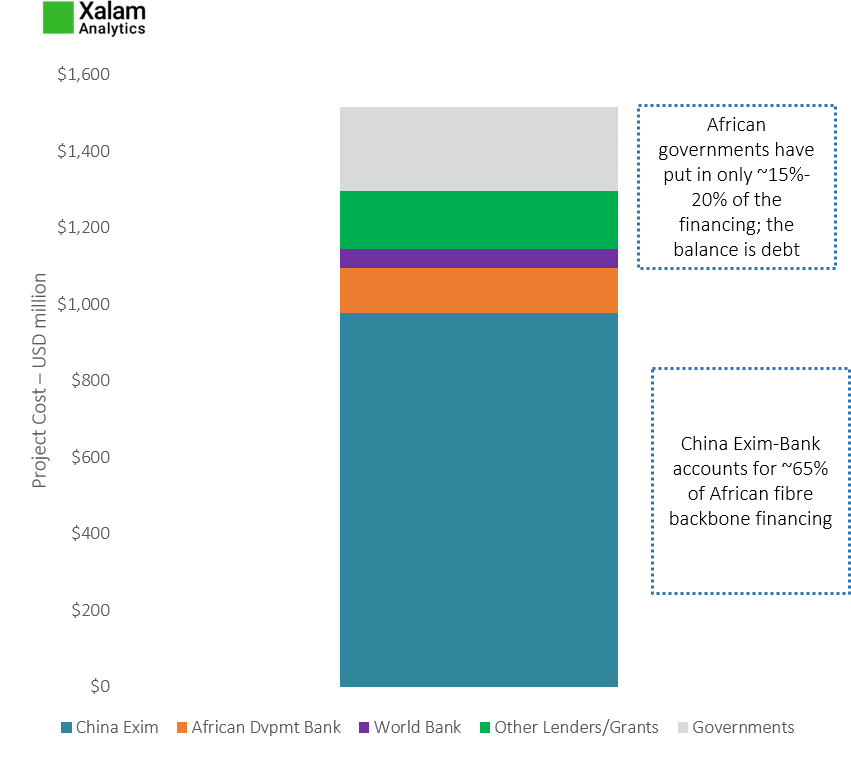 Source: Xalam Analytics estimates; data as of June 2018; from "The Future of African Backbones and Metro Fibre Networks", a Xalam Investor Report, August 2018

How to maximize the state backbone asset: Liberalize the metro

Protecting the newly-built fibre asset is an understandable impulse; but it’s shortsighted and raises the risk of the backbone turning into a white elephant. To be sure, white elephants are not inherently terrible in this case. There is, in our view, considerable value in having a fibre infrastructure asset in place, so long as operating costs are manageable. What would be terrible would be having taxpayers on the hook for paying back the fibre backbone debt, while the asset stays underutilized because it’s being protected through a monopoly model. This scenario may unfortunately play out in several markets.

Ultimately, our research argues that government backbones, when well-managed, and in a competitive environment, strengthen the private sector’s metro business case, leading to increased metro fibre buildout. In effect, the best way for governments to maximize their backbone investments is to strengthen their management and fully liberalize the metro. The liberalization of the metro, combined with lower backbone prices, would drive metro fibre rollout, and ultimately, asset utilization. This in turn would drive revenue for the backbone and for the broader economy – and at a much faster pace than a quasi-monopoly operation would.